We are ROOTS & ROUTES Cologne (RRCGN) from head to toe – and as a non-profit initiative active in Cologne since 2013. We strengthen young artists* at the roots (ROOTS) and open spaces for them to discover new paths (ROUTES). As experts in international cultural youth work, we create unique opportunities for experience – together with over 100 freelance instructors in our international network.

We believe in the right of young people to be heard and take them seriously as artists. Our vision is an open, inclusive society; a world where people are touched by the expression of others. As part of the international ROOTS & ROUTES movement, we are committed to dismantling discriminatory structures and to the participation of all people in cultural and artistic life. 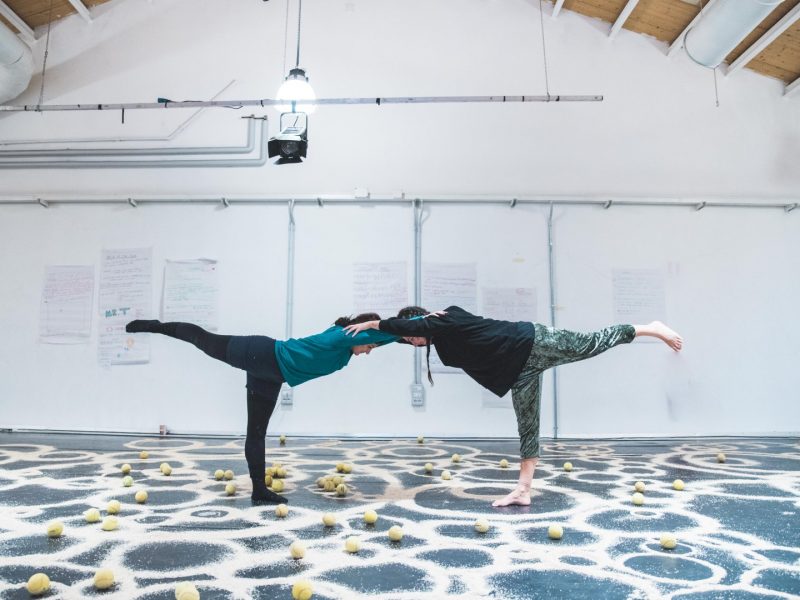 RRCGN promotes the development, commitment and exchange of young artists. As a specialized cultural education institution, we find and support artistic potentials for which there are no suitable offers so far. Our projects link urban culture and contemporary art; often in the form of transnational and transdisciplinary residencies.

We bring young artists together in ever-mixed groups and design safe spaces with them, where they expand their horizons, make contacts and gain new possibilities for action. We promote self-empowerment: participants experience that art moves people and can bring about change; they respond creatively to social inequalities and advocate for diversity-conscious cohesion.

On December 4, 2013, twelve people met in the rooms of the Academy of World Arts to found an association: The big bang for ROOTS & ROUTES Cologne e. V. (RRCGN), our association, which since then has successfully linked urban culture and contemporary art, international encounters and local commitment, youth work and artistic professionalism.

Much easier than with the universe, we can describe what came before with this big bang:

In 2001, Rotterdam was the European Capital of Culture. Activists from cultural and anti-racist work such as Mira Kho and Ed Klute asked themselves how the cultural events planned for it could also be accessible and exciting for young people from this multicultural metropolis. In response, they developed a format that combined youth culture and youth media work: young people with talents in dance, music, and media were invited to workshop weeks that worked toward local festivals: Prominent artists* were recruited to give masterclasses; at the end of the workshop week, the participants themselves performed as part of the festival.

This is how ROOTS & ROUTES Rotterdam came into being: an organization that in subsequent years organized similar workshop weeks in other Dutch cities such as Amsterdam and Utrecht; and then, in order to spread its successful model across Europe, applied to the EU Culture Program in 2004 for a major 3-year project with 8 countries involved.

In Cologne, too, there was an important birth in 2001: The hip-hop network in the Nippes district came into being. Under the leadership of the district youth welfare office, youth centers and schools joined forces and have since organized a project phase every fall (with the exception of the Corona year 2020) with a joint closing event in the gymnasium of the School Auguststraße. Regular cooperation partners were the jfc Media Center and the Open Jazz Haus School.

A series of three international hip-hop summer camps emerged from the network: in 2003 in Cologne and Adenau under the sponsorship of the jfc Medienzentrum, in 2004 in Stockholm, and in 2005 in Barcelona. These camps not only laid the foundations for the later Cologne-wide Beats-vom-Hof camps of the SKM, but also made their organizers attractive to the Dutch ROOTS & ROUTES team, which was looking for international project partners.

In 2005, the 3-year project “ROOTS & ROUTES International” started in 8 countries; the German partner was the jfc Media Center Cologne, where a department for international and intercultural work slowly formed, which was the headquarters of the ROOTS & ROUTES activities in Germany until summer 2014. Active members of the department team included Andreas Kern and Sina Schindler (now RRCGN association chair) and Janna Hadler and Sascha Düx (now RRCGN leadership team).

The work in the international ROOTS & ROUTES network was very colorful and exciting from the beginning; especially since very different organizations met here: some more rooted in hip-hop, others in contemporary performing arts; some more in youth work, some in artistic career orientation and talent development, some in arts education.

In the years from 2010, it became even more diverse:

ROOTS & ROUTES Cologne on its Own Two Feet

p>At the beginning of the 2010s, the Cologne ROOTS & ROUTES team increasingly felt the desire to put the work on its own feet. Thus, at the end of 2013, the new association RRCGN was founded, formally and in terms of personnel independent of the jfc Media Center, which ended its membership in the ROOTS & ROUTES network at the end of 2014, in order to focus its profile more strongly on youth media work in Cologne, NRW and Germany.

RRCGN took over the role of the ROOTS & ROUTES network node in Cologne and Germany from 2014 as a full member of the ROOTS & ROUTES International Association. The association started on a purely voluntary basis: every Friday, association members met to jointly develop ideas, write project proposals or develop a first association website – mostly in the rooms of Coworking Cologne/Railslove, which we were kindly allowed to use free of charge. Then, at the end of 2014, the first projects started: RRCGN became a partner in the transnational project Routes to Employment coordinated by ROOTS & ROUTES Rotterdam, and organized the international youth encounter Music and Media for an Open Europe (#MaMOE14), the first project under its own leadership. #MaMOE14 also established the tradition of the RRCGN Baltrum Projects, which have since been held almost annually in November.

Three Employees, one Office and 24Hz

After the first projects were organized on a voluntary or honorary basis, the first two employees of the association, Janna Hadler and Sascha Düx, were hired in spring 2015. For a time, they were joined by Sina Schindler, who had already coordinated the U-CARE project with the two of them; however, she then moved from Cologne to Berlin and joined the association’s board of directors.

2015 was perhaps the wildest year in the association’s history: RRCGN hosted four international youth encounters and at the same time organized the first and so far only festival in the association’s history: the 24Hz Festival for Urban Media Art; there the great piece “Dots, lines and the cube” by the Japanese theater company Mum & Gypsy also had its German premiere. Actually designed for a two-year rhythm, we realized: This costs too much energy, without additional partners and donors such a festival is not sustainably feasible; so it was then put on hold until further notice.

RRCGN had at that time no association office: All organizational work was done in the living rooms and bedrooms of the staff team, where growing amounts of files now had to be stored. Suitcases of material and technology piled up in the basement of the then treasurer Aileen Wessely. In 2016, they were finally able to move into a 30-m² office space in the Luisenviertel – to this day, the RRCGN headquarters.

In the following period, RRCGN was also increasingly active in larger projects: from 2015 to 2018, the RRCGN team coordinated a large transnational project for the first time; from 2016, proven project formats from the pre-RRCGN period were resumed with The ROOTS & ROUTES Experience and The ROOTS & ROUTES Peer Coach Academy; in 2017, the nationwide project Young Arts for Queer Rights and Visibility (#YAfQRaV) was launched.

In 2018, RRCGN was awarded one of two equal young.europe.awards at the Jugendkulturpreis NRW – especially for The ROOTS & ROUTES Experience 2017, but also for “the continuous exemplary, cross-border work of ROOTS & ROUTES, which is a particular challenge due to the political developments of recent years and the current state of Europe.” This was followed in 2019 by first prize in the BKJE national competition “Rauskommen! The Youth Art School Effect” for the international encounter Who am I – Young Artists for an Inclusive Society, realized in cooperation with the KREA Youth Club Bergisch Gladbach.

From 2019, RRCGN received basic municipal funding as a specialized cultural education institution in Cologne for the first time; in 2020, this basic funding was increased to a full staff position. 2020 also saw the start of the new major RRCGN project iJuLa – intersectional youth labs in the Veedel. With funding from the federal program “Demokratie leben!” and from the DOHLE Foundation, among others, the team was expanded to include project staff Yves Sanwidi and Mehregan Behrouz. Tim Junge has also been supporting the association’s work as a salaried supplementary employee since 2020.

The core of the iJuLa project is pop-up youth labs, which are to be opened one after the other in two Cologne districts. The first lab in Cologne-Zollstock has been moved into and will be occupied by the RRCGN team together with the 27-member iJuLa youth curatorship until the end of 2022. This is the first time that RRCGN has its own premises for artistic and cultural educational work.

In 2021, RRCGN was also able to relaunch the association’s public relations: With a new logo, new association design and new website.

Another relaunch is pending at the level of the international network: In the crises since 2008, the ROOTS & ROUTES network has lost six important member organizations – also the parent organization of the network, ROOTS & ROUTES Netherlands in Rotterdam, had to cease operations in 2020. But new partners could also be found, in Istanbul, Lille, Liverpool, Marseille, Kaunas and Rotterdam; a joint restart of the international ROOTS & ROUTES network is pending and will hopefully pick up speed after Corona.